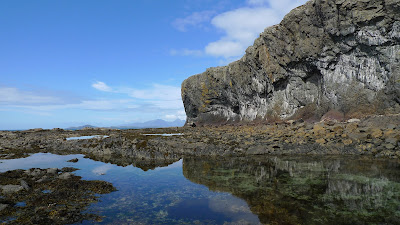 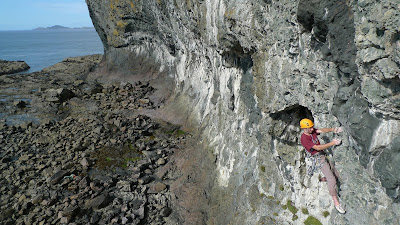 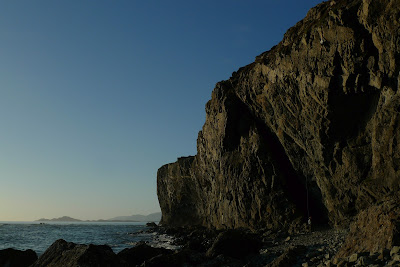 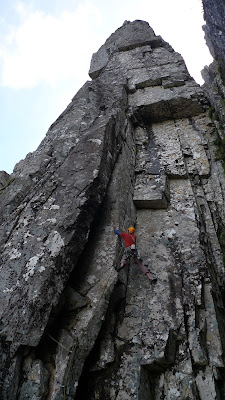 After a quick abseil and it was Iain's turn to give his route a go. His pitch was hard and varied with some tricky back and footing up the initial crack/fault, and then after a slightly easier section, further hard thin wall climbing. This led to the Scansor belay. Tony seemed to have no problem seconding, but I was definitely having up huff and puff a bit. A short second pitch directly up the wall above was then then easily dispatched by Tony to complete Gecko Wall E6 6b,6a. If you are wondering where the name comes from, then find out what Scansor means, and you should be able to work it from there.
Posted by Blair Fyffe at 22:22 No comments:

Every year, around the 20th of August, a small band of snow geeks take to the hills to seek out and record how much snow remains in the Scottish hills. This year was no exception with various teams out in different areas. Why do people do this? partly for science; the data forms part of a paper on Scottish snowpatches published each year in one of the weather journals, partly as it is an interesting subject which is shown by the popularity of threads about snowpatches threads such as this one  http://www.winterhighland.info/forum/read.php?2,154638 and partly for a nice day on the hills. There is even a Wikipedia page on Scottish snowpatches  http://en.wikipedia.org/wiki/Snow_patches_in_Scotland

Snow is an material that I am very interested in myself, and it is a subject that I have written on before http://blairfyffe.blogspot.co.uk/2012/01/snow-cover-in-lochaber.html. Therefor I was keen to get involved. On Sunday (18th) myself and friend Tony Stone decided to have a wee wander up the Ben to see how the patches were doing. It was a cloudy day, and we could not see how much snow remained up in Coire na Ciste.  We headed round into Observatory Gully where the largest patches tend to be, and were suitably impressed. The scale and depth of the remaining patches is quite evident in the pictures below. I suspect that there has only been one year during the past decade or so when there has been more snow here on the 20th of August, and that was 2008. Survival of these patches to next winters lasting snow seems very likely. 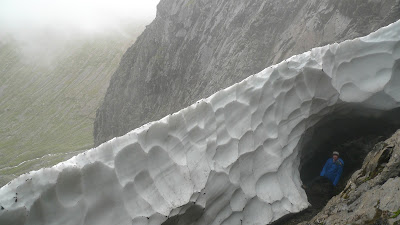 Myself standing by the patch below Point Five Gully (photo Tony Stone). 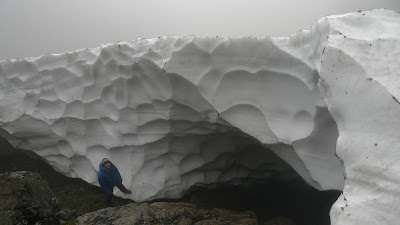 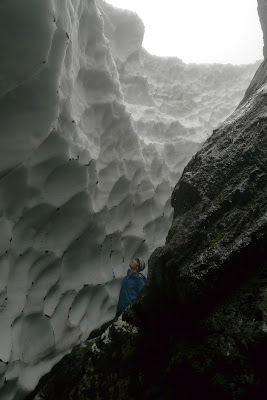 Considerable depth in the Observatory Gully patch. This is almost exactly the same location as the picture in the Wikipedia article I linked to near the start of the post. (Photo Tony Stone) 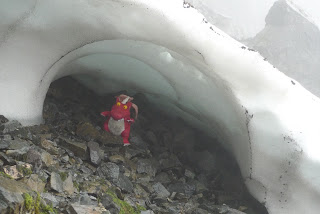 We found all sorts of bit and bobs on the Ben including this Welsh Dragon. I found a single Grivel crampon in Observatory Gully and an almost new single ME glove just down from the CIC hut. Get in touch if they are yours (Photo Tony Stone).

On Tuesday (20th) I was working. Since my last blog post I have manged to get a part time job as a countryside ranger, which has been good. Fortunately my boss allowed me to do a day snowpatch surveying as part of my work which was greatly appreciated (countryside ranger events and information can be found here https://www.facebook.com/LochaberCountrysideRangers).  This was partly because Mark Stephan going to come along to do a piece for the Out of Doors program and was keen to speak to me. Joining myself, Tony and Mark was another snow geek Iain Cameron, and his wife Claire.

We took the gondola up and went and had a look at the remaining patches on Aonach Mor.  Although not as impressive as those on the Ben, they were also looking pretty healthy. Myself and Tony then made rare summer ascent of Easy Gully (very green), and headed over to see if we could get a view of the Aonach Beag patch. Unfortunately cloud prevented us from seeing anything, so we turned round and rambled back done.

Overall it is currently looking like a promising year for snow patches, especially in Lochaber. Marks program will probably form part of this weeks Out of Doors to be transmitted on Saturday (26th) morning. 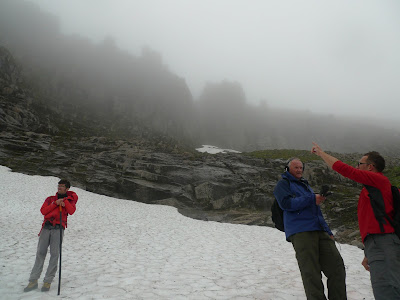