Rules of the Road

To be honest, this winter has not been the most successful for me from a climbing point of view. This has been due to a combination of factors; more work than in previous years, a decision to put some effort in training for rock climbing and a knee injury. I hope to write about some of these in the near future. Anyway, I recently decided to make an effort to get out winter climbing. With a good weather forecast, and Donald was super keen to try a new route that he had his eye on I decided to turn down an easy day’s work to get out climbing. However, things did not go entirely to plan…
The evening before our planned climbing day, Donald called round mine for a brew, and announced that he had just come over from A&E, where he had spent the previous few hours, and that he could not climb the next day. To save his energy for climbing, he had decided not to go on the hill, but to go for a mountain bike ride instead. Unfortunately he had taken a tumble over the handlebars and landed on his shoulder. Although not broken, it was pretty sore, and climbing was not really an option. Luckily, Donald had found me a replacement climbing partner, Andy, who would head up from Glasgow in the morning. This meant that Glen Coe was a much better option than Ben Nevis. 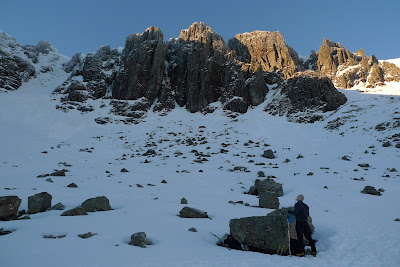 Andy looking at a rather dry looking Coire an Lochan
I had been working over in the Cairngorms for a few days, and had lost touch with exactly what conditions were doing in the West. I assumed the higher crags in Glen Coe would be okay. Summit Buttress was looking quite black from the carpark, but we assumed that was due to the fact it was still semi-dark. However, arriving into Coire an Lochan we saw that things really were black. There was some neve on the ledges, and the easier routes were in good nick, there was no snow or rime on any of the steep routes.
We did discuss doing East Face Route Direct, a large steep groove which did have a few blobs of neve in it. However, it reminded me of a time back in 2003 when being I had climbed Inclination in well frozen, but not very white condition.  Although it was probably acceptably white; no-one ever commented about the conditions we climbed it in, and there were plenty of other teams out on steep routes that day, I always felt I had some thing slightly wrong or that our ascent was slightly tainted. It is a similar feeling to having rested on gear on some classic rock route that should have been cruised. I have always wanted to return to do Inclination in proper winter nick, to restore honour, as it were.
What constitutes a route being in acceptable winter condition varies from person to person, and depends on a lot of factors. Andy said that he thought that the conditions people accept as winter conditions as slightly different than ten or so years ago, and that by the standards of today, East Face Route Direct would have been acceptable.
I don’t know whether other people get this tainted feeling by doing routes which are not super white. However, I know that had I climbed East Face Route Direct, it wouldn’t have felt right, and it would have and it would have hung around the back of my mind like Inclination has, until I finally did make a winter ascent of it.
In the end the did Spectre (V,6) which was in good condition, and then soloed up easier ground to the summit of Stob Coire an Lochan. It was not quite the day I had originally envisaged, but that is often the nature of Scottish winter climbing.
Posted by Blair Fyffe at 19:28 1 comment: 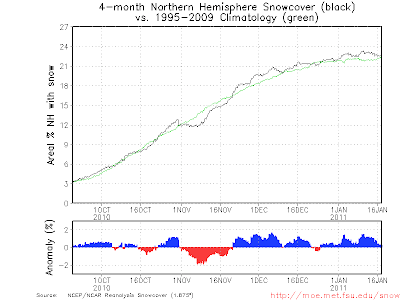 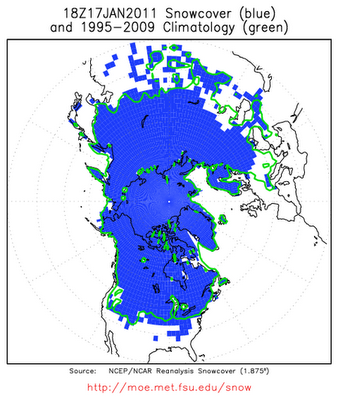 Pottering on the Ben 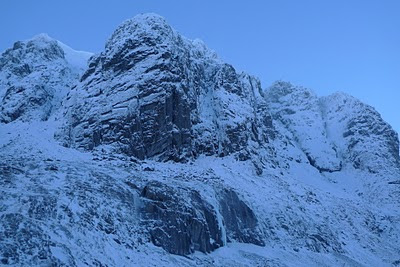 Carn Dearg Buttress. Castle ridge takes the crest of the furthest right buttress in this picture
Sometimes climbing plans work out, sometimes they don’t. In this case my plans to try something hard didn’t really work out, the main reason being, for various reasons,  I didn’t really have a climbing partner. I wanted some good pictures of Carn Dearg Buttress in winter, and so decided to wander up anyway, take some pictures and see what happened. It is quite nice sometimes not to have a fixed plan, and to be free to move around and see where the mood takes me.
A few photographs later, I found the mood taking me over toward Castle Ridge. Castle Ridge was the only main Nevis ridge that I have not done, and being described as the easiest of these I thought it would make a pleasant solo, especially as these was nobody around that part of the mountain. 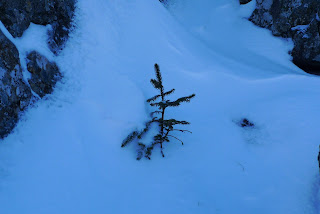 A lonely tree high on the Ben
Being on my own, able to move at my own pace, and just with my own thoughts for company felt free and satisfying. As I ambled up the lower part of the ridge I found a small and isolated tree in a hollow between the rocks. I paused to contemplate its lonely fate; to struggle and ultimately fail to grow to maturity, and eventually be killed off by the wind, cold, and lack of nutrients. I hadn’t known that there were any trees up amongst the great cliffs of the Ben, and it felt fitting to find one when on my own.
I ambled on, enjoying the views and continuous upward movement, up to the crux barrier wall. The route takes a short but quite steep and exposed groove. I made a move or two up this, but in such an exposed position, without the security of the rope, everything felt a bit insecure. I did not even know for sure that I was in the right place, especially as Godfery Peroux tells a story in his guide about going the wrong way at this point. I was not really in the mood for fear, so stepped back down, and bypassed the wall via a traverse the left. 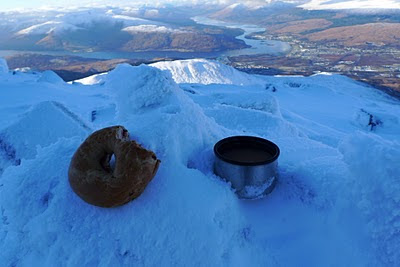 A jam bagel and cup of tea at the top. Brillant!
At the top of the ridge I paused for a bagel and cup of tea, and stared out across the frozen Lochaber landscape. It had been a successful day, and it was still only about 1pm. I considered heading on upwards towards the summit, but decided instead to head down.
After a quick snooze back at the house, I headed down to my local wall for a wee bouldering session.  The warmth, the non-serious situation, and the feeling of unencumbered movement on the wall felt like nice way to finish the day.
Posted by Blair Fyffe at 17:41 No comments: 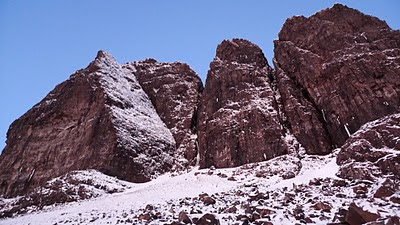 Storvegan takes that obvious corner ramp.
A few years ago Dave Mcleod invited me on an adventure to climb the old man of Storr up to Skye. We managed it, but it was pretty terrifying exercise in technical climbing (solid British 6a) on some pretty horrific rock. It felt a bit more serious than the E3 grade it gets in the guide book would suggest.
In terms of scenery I remember what impressed me the most, was not the old man itself, but cliffs behind.  Massive impending buttresses that looked like they belonged in Mordor. They were steep, dark, damp and the rock was crap. In short they were repulsive, and yet contained some amazing looking lines. I had heard that some of the deep gullies had been climbed by Fowler, but that was back in the eighties when winter were winters, and after the old man I certainly wasn’t inspired by a summer attempt. 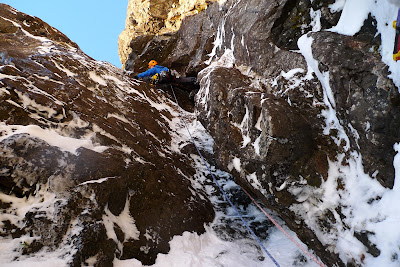 The crux involved some tricky moves left under the roof and then up some very thin ice in the corner above
Then during January 2010, when winters had started becoming winters again, I read that Martin Moran had climbed the huge corner ramp on those cliffs, and naming it Storvegan. What at line. However, lots of things were happening closer to home and I didn’t make it back up there in time.
Just before Christmas 2010, winter was back with vengeance. I had a few days off, as had Rich Bentley. I had heard that a friend had done Strovegan in early December, and it was colder, than it had been then. Therefore a plan was hatched for Storvegan.
A significant part of the reason that I go winter climbing is the landscapes and views; the ephemeral world of snow, ice and rock is so removed from daily life.  Walking up past the old man through the strange gothic snow covered landscape of Storr as the sun edged up over the mountains on the Eastern horizon was about as atmospheric as it gets. 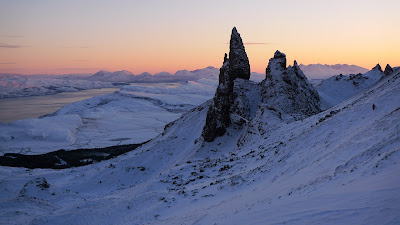 Heading back down through the amazing snow covered landscape of Storr.
The route itself went well, with me getting the crux pitch. It felt quite pokey for grade VI, 8, with the gear being pretty hard won on the crux. Two more gradually easing pitches and some moving together led right to the summit. A leisurely coiling on ropes and sorting of gear before strolling back down through the enchanted landscape, and just able to make it back through the forest with out the need to head torches.
Perhaps not the most balanced route I have done, but the for line, and atmosphere of the place, one of the best.
﻿
Posted by Blair Fyffe at 15:46 No comments: