Spain (and a little bit of winter) 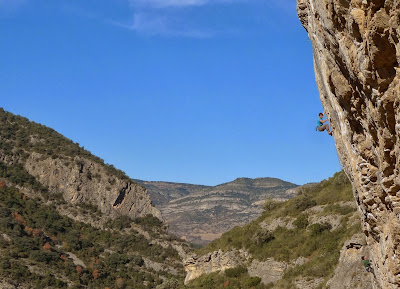 For the past few years I have tried to get away on a sports climbing trip to Spain during November. There is usually not much happening climbing wise in Britain at the time of year, while conditions is Spain tend to be quite good. This year, because of the way things worked out, I ended up having two shorter trips rather than one longer one. The first trip was to the Tremp area of Catalunya where I had spent some time last year. I headed out with my Dad, and we met up various friends mainly from North Wales area. I enjoyed climbing with my Dad, especially as he seemed happy to enjoy the sunshine, and give me a belay when required. We spent most of the our time at the Bruixes wall at Terradetes. Already having done having done most of the route routes that I stood a chance of on-sighting, I was in redpoint mode, but got manged to get all the routes that I tried pretty rapidly. 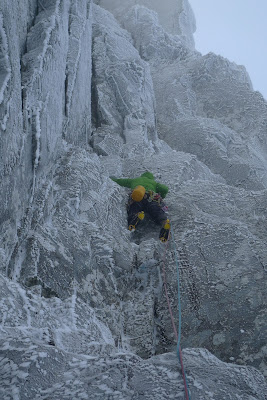 Now for something a little different...... Rich Bently on the 3rd pitch of Archangel.

After that it was back to Britain for a stint of work. I did however, manage to sneak out one day and climbing Archangel on the Ben with Robin Clothier and Rich Bently. Conditions weren't amazing, but climbing as a three, and with lots of people we knew on the hill that day, it was sociable and nice to get out in the winter environment again. Rich wrote a nice wee bit out it, with some more pictures here http://www.mountainmotion.co.uk/blog/ice-climber-goes-mixed-climbing-ben-nevis/. 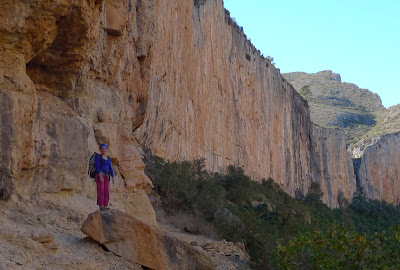 After that it was back out to Spain again. This time myself and my friend Sophie Whyte headed to Chulilla. I was well impressed with this area, and am keen to go back at some point. In terms of combination of quality and variety, I though it was probably the best sports climbing areas that I had ever been to. There were crags with numerous three stars routes on all grades grades from F6b+ to F8b+ within a few minutes walk of each other. 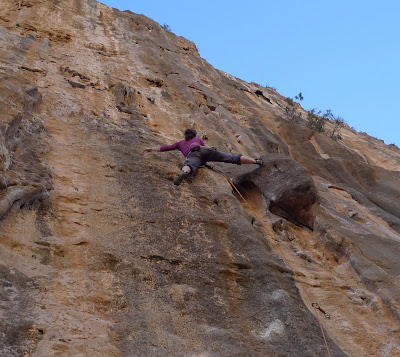 Sophie on the Danos Colaterales, a lovely, long, sustained F7b+.

Having never been there before, and with so many good routes, I spent my time trying to onsight stuff. I didn't quite get an 8a onsight (but that is not really surprising as I didn't try to onsight any), but I did manage to onsight Planeta Namec F7c+, which use to get 8a. Maybe next time.....