A short drive to the Cairngorms 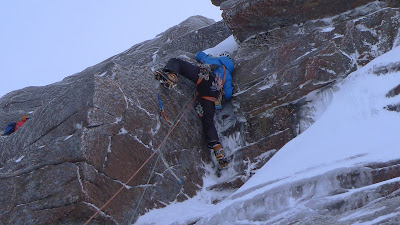 Guy on the tricky bulgy on the first pitch of Wachacha in the Northern Corries. It was steeper than it looks.

I own a car. I have done for quite a long time in fact. To be honest it is probably the must useful piece of climbing equipment I have. The ability to get me from where I live, to where I start walking in is critical. I could be the best climbing in the world, but without the ability to get to the crag I would not get anything done. In summer, in more popular places like Wales it would probably be possible to get the bus, or hitch. However, that just would not be practical for Scottish winter climbing. However, recently I have been thinking about my car.

Last week, for example, I had a day off and wanted to go climbing. Conditions in the West were not very good, so we decided to head East to the Cairngorms. Myself and my flatmate jumped in my car at about 6.30am and headed over to meet Murdoch in the Cairgorm carpark. It was a really pleasant sociable day day climbing. We were climbing as a three, so there was good banter on the belays, I met my dad on the chatted to him for most of the way into the Coire.  There were some friends from the Lake district who I had not seen for a over a year on the route next to ours. We did a route that I had not done in winter before (although I had seconded it as a rock climb in about 1990).  All in all it was a very enjoyable day. 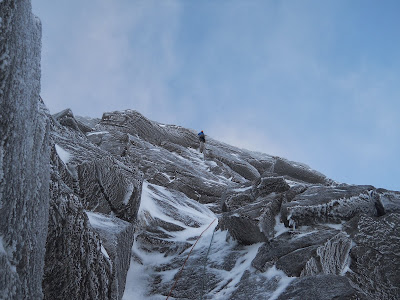 Myself on the top pitch

However, what is the energy energy cost of that route. I drove over, which involved taking my car from where it was parked about 100 metres down to sea level, then back up to about 600 metres at the Cairngorm carpark. This was a distance of about 70 miles. I reversed the route at the end of the day. My car weighs about 1200 kg, plus the weight of the people and kit it contained. To do this I probably burnt about 15 litres of unleaded pertol, which roughly equates to about 500 Mega Joules of energy. An averge man consumes about 10 MJ of energy in the form of food per day (2500 Kcal). Therefor for that one return journey I used the same amount of energy in petrol as I do in the food I consume in roughly 50 days, almost 2 months.

15 litres of Fuel costs about £20. How much money do I spent on food in 50 days, I am not sure, but it will be a lot more than that. When you think about it that way actually seems quite cheap in comparison. 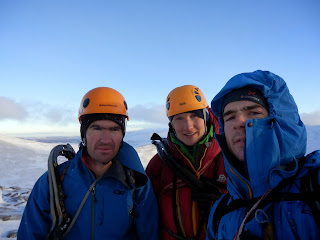 Myself, Murdoch and Guy at the top

Should we be allowed to buy energy in the form of petrol at that price. I have a friend who lives in Llanberis and works over near Llanrwst, and so drives over the Llanberis pass every day. She once said to me that petrol was very expensive. However, perhaps one day I should offer to go and help her push her car from Llanberis to Llanrwst, and after that it might seem cheap. To teach people this I think that as part of your driving test you should have to push your car across a carpark. 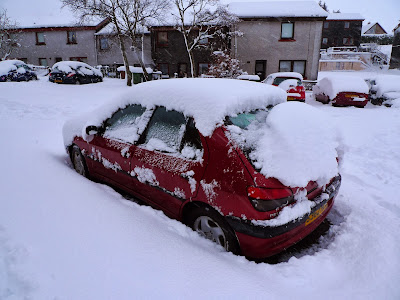 My old car (not the one I did all the calculations above for) sitting in the carpark one day a couple of winters ago that it snowed quite a lot.

Now I am not saying that people don't spent significant amounts of money on petrol. I regularly put £60 in the tank and don't think much of it while I really think about spending £60 on other material thinks. What I am trying to say compared to food, the per unit of energy petrol is cheap. However, cars are heavy things, and it takes a lot of energy (and therefore money) to move them long distances. Then airplanes are a whole different league again in terms of energy used.

Although it does seem slightly immoral to me to be regularly use up huge amounts of energy to go climbing, should we be allowed to do this just to climb up a bit of rock or ice. However, the alternative, staying at home is even more immoral.One day I will be dead, so I might as well spend the time between now and then doing what I enjoy, which is climbing up bits of rock and ice, and if it requires lots of energy to do it then so be it.  Therefore I will continue driving all round the country, and taking cheap flights to Spain, to get my climbing hits, and am very thankful that I can buy all that energy to do that at £1.33 or whatever the price of a litre of unleaded petrol is.
Posted by Blair Fyffe at 16:40