Spring in perhaps my favourite time of year due to variety of outdoor activities that you can partake in.

Since returning from Canada I have had some good days on the hill. First up was Kings Ransom VI,6 on Aonach Beag with Nona. Nona was going through a stage of dropping things, so I kept hold of my camera, so no pictures I am afraid. This gave two good long pitches, the first being an icy gully/chimney, and the second a good icy mixed pitch, followed by some mountaineering to the top. After that a nice stroll back over Aonach Mor, we had a tasty cup of tea in the Nevis Range summit ski patrol hut before heading back down.
The next day Iain Small joined us to do Astronomy on Ben Nevis. This is a route that I had always been keen to do, partly for the line and style of climbing and partly as my dad had done the first winter ascent. There is a film of the 1st ascentionists re-climbing the route couple years later. They bivi on the face, and Ian Nicholson dropped their breakfast. We didn't bivi on the face, and thus had already eaten our breakfast by the time we got up there. However, in homage to the film Ian Small did drop his belay plate. It is quite a long route and as we were climbing as a three were not super fast. However, it did mean that we toped out to a beautiful sunset.
After that I was busy with work for a while, but did manage Observatory Buttress on a particularly unpleasant day. The forecast had not been great, but on the walk in it looked like it might clear up so we pushed on. It didn't clear up however, but at least I got another three star route ticked.
Last week I had a few days off.  Nona and I headed up to Torridon for a few days. There we did Salmon Leap (VI,6) on Liathach. I had not been into that area since I had a wee incident with an avalanche in that area twelve years ago. Salmon Leap gave some good steep interesting ice climbing, with generally good weather except when I was on the crux, when a constant stream of spindrift started flowing down the route.

The next day was pretty driech in Torridon, so had a wee bouldering session at the Ruthven Stane near Inverness. After that it was time to get the skis out, and had a good couple days skiing at Nevis Range.


Finally a couple of days ago I headed back up the Ben with Iain Small. The weather was not quite as good as we had hoped, but we had a good day doing a route called Edge of Beyond (VI,6). It gave three good long pitches of icy mixed climbing up onto Tower ridge.

Altogether an enjoyable few weeks pottering about on the hills. Lets hope for more of the same, and perhaps a few rock routes. 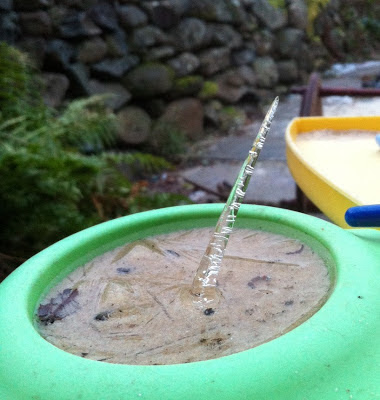 I recently saw this pretty cool picture that a friend took on an icicle which has grown upwards out of a small pool.  It is no trick, it really has grown upwards. The surface of the pool freezes first. As the rest of the water freezes and expands, the pressure increases within the remaining liquid. This pushes out the liquid up through the weakest point, which will generally be somewhere near the middle of the surface ice layer. As soon as some water gets pushed through that hole it flows out slightly building up a small circular wall. As the pool continues to freeze, more water gets pushed out, building up wall further and so on to finally produce an upsidedown icicle.

However, conditions (in terms of temperature, shape of pool etc) have to be correct for this process to work. I have only ever seen one picture of one of these before, and it was not quite as good as this example.