A strong Northerly howls across the landscape. The temperature is about a degree above freezing. Sleet slants diagonally down from a leaden sky, plastering any exposed object in a layer of slush. Looking out the window today it feels like it could be Scotland, well except for the 30m ice cliff dropping into the sea that I can just about see through the mist.
This is not Scotland, this is Rothera, the main base for the British Antarctic Survey (BAS), located on an island just off the West coast of the Antarctic Peninsular at about 67º South. I have been here for about a week now, and will continue to be based here for the next four months or so.
My journey South started about two weeks ago. Train from Aviemore to Cambridge, minibus from Cambridge to Heathrow, flight from Heathrow to Madrid, Madrid to Santiago and then Santiago to Punta Arenas at the Southern tip of Chile. Delays due to weather meant that I was stuck in Punta with eight other BAS employees for three days.
Punta is an interesting town,  and we spent a day wandering around some of the more random shops. One of my favourite was the hardware/outdoor/weapon shop, were you could purchase anything from screwdrivers and hacksaws to chalk and rockboots to handguns, rifles and large hunting knives. I purchased none of the above.
The next day, having seen the sights of Punta, a group of us decided to hire some bikes, and cycled up into the hills behind the town. On the way back down into town my gear set fell to bits.  Rather than walking all the way back, I took up my companions offer of a tow.  A towing system consisting of three shoe laces and a belt was constructed, and we set off dodging traffic through busy streets of Punta. At this point I was beginning to think (as you might be) what could go wrong with this plan? Surprisingly nothing did go wrong, it worked perfectly, and we soon made it back to the bike shop.
On our final day in Punta we hired a car and drove up to the Torres Del Paine National Park. This was a lovely spot, and a place that I would be keen to return to climb one day. The weather then improved, and the following day the BAS aircraft was able to fly us over the to Rothera.
Since arriving, myself and the other new field assistants, have been busy with training and getting organised for our field seasons. Although a lot of the mountaineering aspects of our work, such as crevasse rescue, were familiar to us from our mountaineering backgrounds, there was plenty of new stuff to cover. A lot of the new stuff had to do with travel, such as how to pack and tow sledges in the field, how to rope the skidoos together in potentially crevassed terrain, and how to communicate with base. There has also been some time to get out and do some personal skiing, and last night there was a pleasant surprise when an empire penguin (which are pretty rare here at Rothera) waddled up onto the sea ice not far from base.
Posted by Blair Fyffe at 00:02 2 comments: 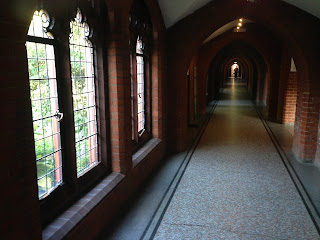 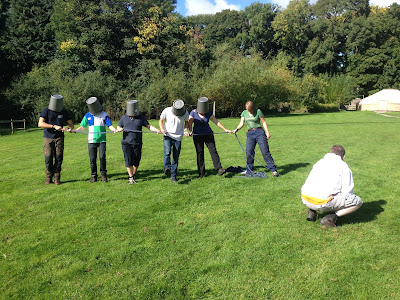 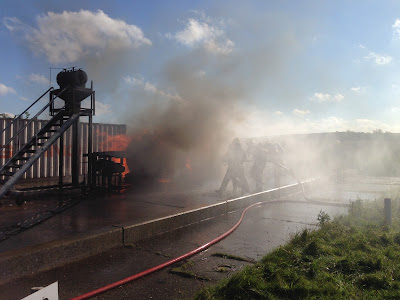 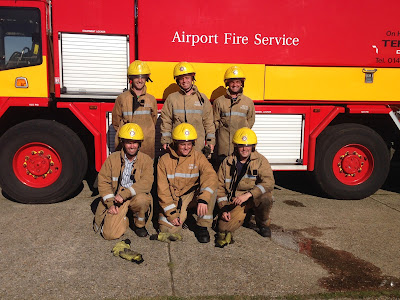 BAS's finest fire crew. After 3 days training, what could possibly go wrong?
Posted by Blair Fyffe at 21:52 No comments: