I enjoy being based in the Highlands of Scotland.  I love the space and the solitude that you can find here, but you can't (or I certainly never have) found elsewhere in Britain. To me the rest of the country feels overpopulated, with people, towns, roads and cars all squeezed in like sardines. Even mountainous areas like North Wales, seems crammed in and crowded. (When talking about the landscape, The John Muir Trust are trying to raise some money to repair the Steal Gorge path, a path used by many a climber, see http://www.jmt.org/appeal.asp for more details).

However, August in the Scottish Highlands does seem to have some disadvantages, it is often warm, damp and midgey, and getting any climbing done feels like hard work. Therefore it seemed a good time escape South to see what overpopulated land had to offer. The plan was for a week of swimming, climbing and perhaps a bit of deep water soloing in sunny Pembroke. 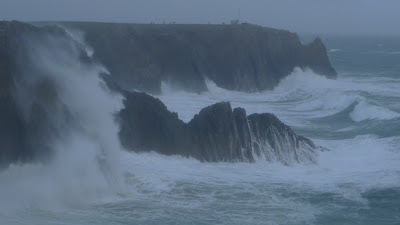 Some big seas, to get an idea of scale people can just be made out on skyline


However, things didn't exactly turn out like that.  After a day and a half of nice weather at the start of the week, when I managed to Barabella, a meaty E5 crack line (not quite a flash as I had seconded back in about 2006), the weather turned. After that it was either very wet, very windy or both, and we only managed one (rather damp) E2 in the final four days of the trip. However, such is the way of things sometimes, and as shown in the pictures, there were some impressive seas to watch. 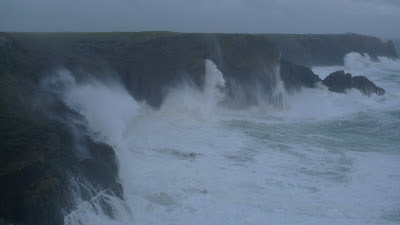 Not ideal for swimming, climbing or deep water soloing. 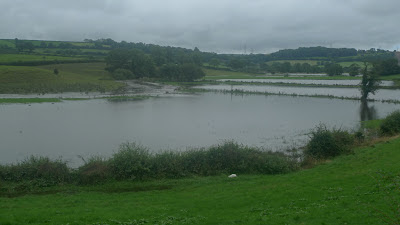 The scene inland a bit. Good for kayaker freaks, not good for climbers. 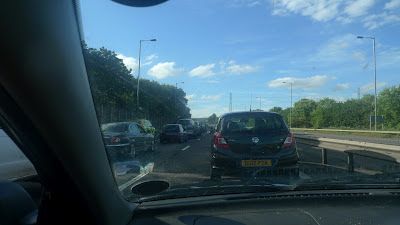 The sun finally came out for us to get stuck in a traffic jam around Birmingham when on the way back up the road. However, it did remind me why I don't live down there.