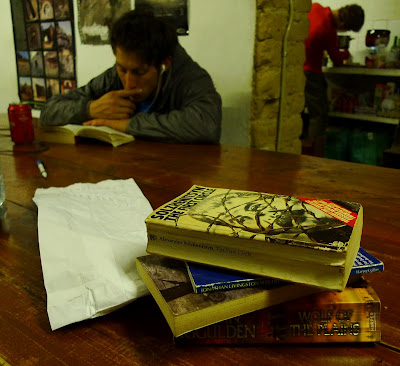 Some good books, essential packing for a trip away.

Firstly this post is not about climbing. However, it is about something that I associate with climbing trips.I decent book is a great way to pass time in airports, in the evenings or when it is raining. I hardly watch any televsion or films (I don't think I have watched a film this year), but I do read alot. As the nights are drawing in, I thought I would make some notes on my top five novels. The list is entirely personal, based on the novels which have made the biggest impact on me at the time that I read them. So if you are heading off on a trip, or want an to spent your evenings doing something more constructive than rotting your brain by watching the X-Factor,  try one of these. Some are quite short and easy to read, while others are a bit more invovled

Crime and Punishment  by Fyodor Dostoyevsky
Crime and Punishment focuses on the mental anguish and moral dilemmas of Rodion Raskolnikov, an impoverished ex-student in St. Petersburg who murders an unscrupulous pawnbroker for her cash. Although it can be quite heavy especially at first, and I actually gave up on my first attempt to read it, it is worth persevering with. The building torment felt by Raskolnikov is very powerful.


Birdsong by Sebastain Faulks
Set before and during the first world war, Birdsong captures the drama of that era on both a national and a personal scale. It is the story of Stephen, a young Englishman, who arrives in Amiens in France in 1910. Over the course of the novel he suffers a series of traumatic experiences, from the clandestine love affair that tears apart the family with whom he lives, to the unprecedented horrors of the great war itself.

The Wasp Factory by Iain Banks
A dark and very original novel about Frank, a sixteen-year-old boy who lives with his father near a remote Scottish village. Their life is, to say the least, unconventional with Frank turning to strange acts of violence to vent his frustrations. In the bizarre daily rituals there is some solace. But when news comes of Eric's escape from a psychiatric hospital, Frank has to prepare the ground for his brother's inevitable return - an event that explodes the mysteries of the past and changes Frank utterly.

One Day in the Life of Ivan Denisovich by Aleksandr Solzhenitsyn
This brutal, shattering glimpse of the fate of millions of Russians under Stalin. As the name suggests the book is about particular day in the life of Ivan Denisovich, a prisoner a soviet work camp (the gulag) in the 1940's. In some ways it is quite an upbeat book, it is a relatively good day for Ivan. However it illustrates a world of incarceration, brutality, hard manual labour and freezing cold where men struggle to survive both the terrible rigours of nature and the inhumanity of the system that defines their conditions of life.


Shadow of the Wind by Carlos Ruiz Zafón
Barcelona, 1945: A city slowly heals in the aftermath of the Spanish Civil War, and Daniel, an antiquarian book dealer’s son who mourns the loss of his mother, finds solace in a mysterious book entitled The Shadow of the Wind, by one Julián Carax. But when he sets out to find the author’s other works, he makes a shocking discovery: someone has been systematically destroying every copy of every book Carax has written.  A page-turning exploration of obsession in literature and love, and the places that obsession can lead.
Posted by Blair Fyffe at 20:39