I am recently (last week) back from a quick sports climbing hit to the South of France with Tony Stone. We flew to Geneva where we got a pretty good upgrade on the hire car. We had booked a Ford Ka, but instead got some pimped up BMW thing. Result!

So from there it was down to Ceuse.  I have been to Ceuse a few times, but enjoy the atmosphere of the place.  Also being not exactly a small crag, there was still plenty of routes I had not been on before. We did four days there, the first three were really successful, on-sighting and flashing lots of routes. Day four was a bit of a disaster, with me feeling weary form the previous three days I failed to get up anything.

Ceuse, not a bad crag. A climber on the classic 8a Bourinator. 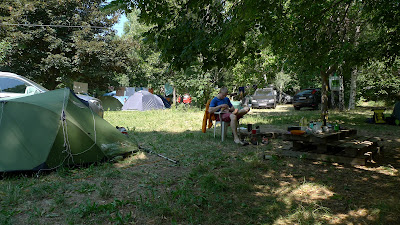 Tony chilling out in the campsite before heading up to the crag.

Next we headed over the Gorge du Tarn. Neither of us had been here before, so were not sure what to expect.  Again the climbing was great, and there was a lovely rive to swim in after climbing. On the other hand it was quite busy and touristy.  There has been a fair bit of re-bolting goin on there recently, and over the past year or so various sectors have been closed. However, we were pleased to find almost all the crags open, with just a couple of very monir small ones still closed.  Again we did four days on, but paced ourselves a bit better so we could still get up at least some routes on the last day. 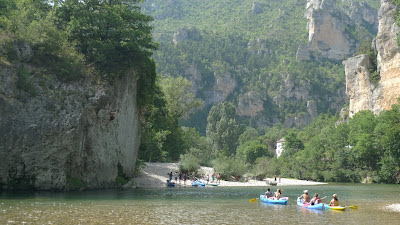 The river Tarn, not a bad place to have a swim after a days climbing. Tony (on the rock on the left) entertains the French ladies with some deep water soloing antics. 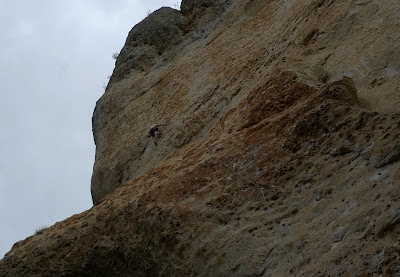 Tony going for the onsight on a long 7c+. The chain is just over the skyline. Unfortunalty Tony got to just below the skyline. It was a bit of a faff to get off, I had to second up to a mid way lower off as tony lowered down, and even then (with a 70m rope), he only just had enough rope to make it. 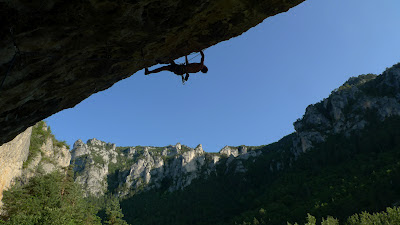 A man from Bristol (James I think his name was) on a rather steep 7b that we did. I was rather pumped at this point, but managed to struggle on and onsight the route.