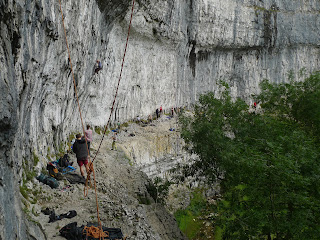 Good times on the catwalk at Malham
On Saturday I had a wee day trip up to Malham in Yorkshire with James McHaffie, or Caff as he is known. There was a good scene at the crag, with various people from all over the country at the crag, including quite a few down from Scotland.  When we arrived the crag was seeping a bit, but with some sunshine and a good breeze it seemed to be drying out quite quickly. Despite a few wet looking holds, I decided to have a go at one of the classic 7c+,s of the crag, Mescalito. Between holding Caff’s ropes on his project I bolt to bolted it a few times to get to know the moves. 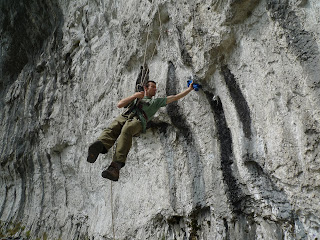 Caff using a t-shirt to dry out holds on his route of choice.
Conditions started of quite good, a bit hot perhaps. However, through the day the clouds rolled in, and it started raining. This in itself was not a major problem, as the capping roofs mean that most of the routes stay dry in the rain. However, the associated rise in humidity meant that conditions became poor, and instead of drying off the crag was starting to seep more. 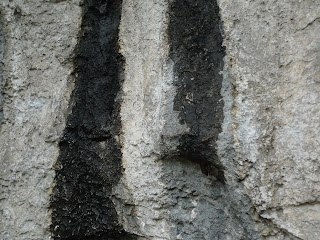 As the rain started and humidity rose the seeps started to grow.
My first redpoint attempt ended at a soaking pocket at about half way up. I left the rope clipped in at my high point, and before my next attempt, I hauled up to attempt to dry the hold. I stuffed a spare t-shirt into it to absorb the worst of the moisture.  On the redpoint the t-shirt was pulled out, and although the hold was still quite damp, I was more ready for this, and kept on throwing upwards for holds.  I somehow made it though the crux bulge, and wobbled my way up the final wall to another soaking hold just before the chain. Quite a few routes at Malham finish by grabbing the chain. I am not sure if Mescalito is one of them, but with no nice finishing holds, and being very pumped with soaking wet fingers, I decided that grabbed the chain was allowed and gave myself the tick.
Posted by Blair Fyffe at 12:31