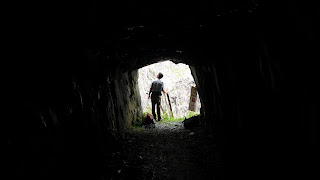 Accessing the new slate routes in Twll Mawr through the tunnels.
I have been spending a bit of time in the slate quarries recently, enjoying the atmosphere of the place, and getting back into the unique style of climbing found here. I have done a couple of routes that I have wanted to do for a while such as Waves of Inspiration (a good long and slightly runout E5) and True Clip (F7b+, but somewhat more technical than your average route of that grade). 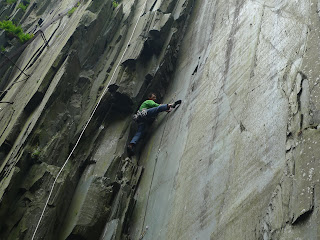 Nick Bullock wishing he was just a wee bit more flexible for the crux of Supermassive Black Hole (F7a)
Back in July a couple of new multipitch sports routes were added to Twll Mawr (more information and topo). I recently did these and found them fun and unusual routes in an area of the quarries I had not climbed in before. I did have an exciting moment on the harder of the routes (Black Hole Sun F7a+) when I pulled off a hold, and sent a foot long dagger of slate crashing down two pitches to the base of the crag. 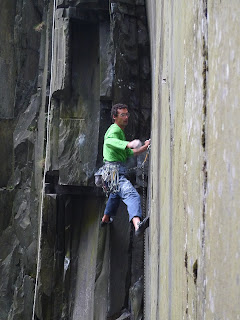