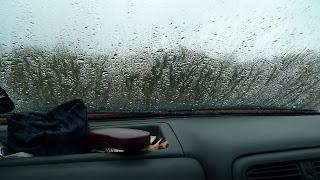 Pembroke part II was mainly like this......
After my successful trip to Pembroke with young Calum (see previous blog post), I was keen to get back down there. The next opportunity I had was a few weekends ago. Unfortunately the weather was less than optimal, and over the weekend I only got two routes done. However, I did get to the Range West Briefing. Much of the climbing in  Pembroke is in a military firing range, and in one area in particular (Range West), access is heavily restricted. Access is only allowed at certain times, and before you are allowed in you have to go to a military breifing, where they basically say don't touch any metal things as they might blow up and kill you. 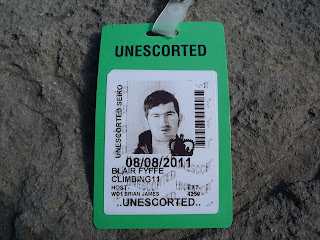 My ticket to the forbidden land of Range West
Anyway my next trip down was a bit better. This time I had 4 days and although the weather was quite showery and despite the fact it seemed to start raining while I was committed on hard routes, I got a fair amount done. On the best weather day, after a few delay I got my pass for Range West, and went in there did an amazing E5 called Tasmanian devil. 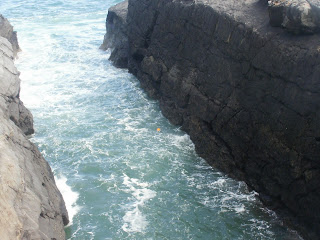 My helmet can just be seen bobbing around in the sea just below the far wall.
Unfortunatley it was quite a windy day, and after doing the route while having some lunch, my helmet blew off the ledge into a deep zawn. The swell was quite big, and jumping into the sea was not really an option. However with a bit of cunning I did manage to rescue it and stay dry. 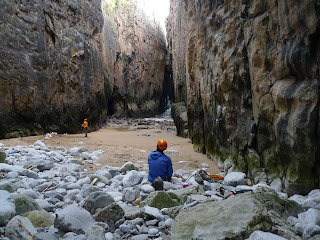 About to start up a route in Huntsman's leap. A rather committing place to be should it start raining, and guess what, it rained both times we went down there. 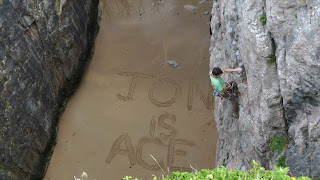 Andy Scott, pumped but above the crux on another fantastic Pembroke E5 while Jon is Ace (apparently). This was another route which it started raining when I was on.
Posted by Blair Fyffe at 14:49