Return to the Alps.

After Norway I was back in the country for a day, before packing up my skis again (well strictly speaking I had never unpacked them), and heading off to the Alps. Myself and Louisa headed to the Bernesse Oberland area of Switzerland for some more ski touring and a few peaks.

After flying out and driving through Switzerland, we arrived in Grindelwald late in the evening. The weather forecast was good, so we headed up early the next morning.

Day one; Get train up to Junfraujoch. Be inspired by the North Face of the Eiger on the way up. Ski across the glacier and skin up to where it got too steep to skin. Continue on foot up the Jungfrau (4166m). Had sore heads as we were not acclimatised. Descend and then fall flat on my face when skiing down the glacier (this really did not help my headache). Continue down to the Konkordia hut.

Day three; Get up early, the snow is very hard, so use a combination of boot packing and skinning to the Hugisattel. It was pretty chilly up here (-11.4 degrees C when I measured it). Continue on foot to the summit of the Finsteraarhorn (4274m). Ski about 1200 metres back to the glacier and head back over the col to the Konkordia hutte.

Day five; Weather a bit better, but the forecast is poor. Climb the Monch (4105m). Ski back over to the Jungfraujoch, and back down the train. Decide I should go and climb the Eiger at some point. Drive over to near Chamonix.

Day six; The weather is poor, so have a rest day.

Day seven; A morning skiing on the Gran Montets in some mixed weather.

During trip we climbed three 4000 metre peaks, skied some nice (and some not so nice) snow, and shuffled about on some big glaciers. A pretty successful trip I thought. In fact I enjoyed my time in the bigger mountains enough that I am thinking of returning this summer to re-launch my alpine climbing career. 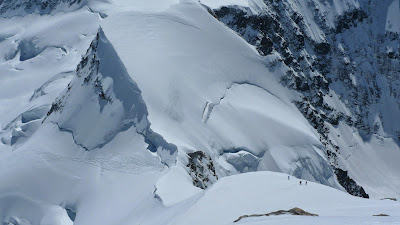 Looking down the ascent route from near the summit of the Jungfrau. I liked the shape of the glaciers. 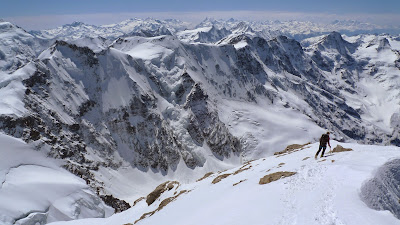 Louisa near the summit of the Jungfrau. Not a bad view. 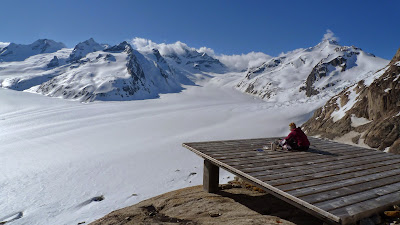 A cup of tea on the helicopter platform below the Konkordia hutte. The Aletsch glacier behind. Cloud can be seen bubbling over the Jungfrau in the background. 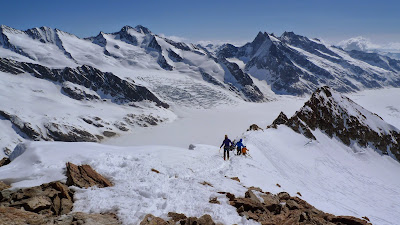 The decent from the top of Kranzberg (3666m). Our skis were left about 100 metres further down, The ski down to the glacier was nice. 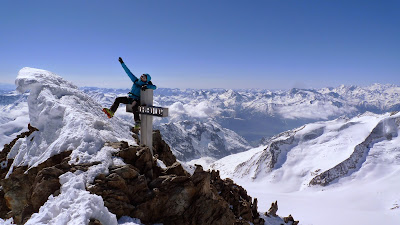 Louisa throwing shapes on the summit of the Finsteraarhorn. 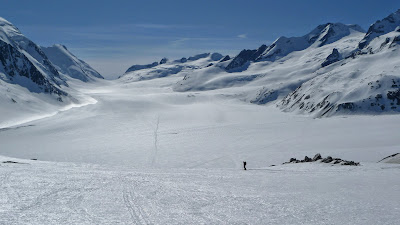 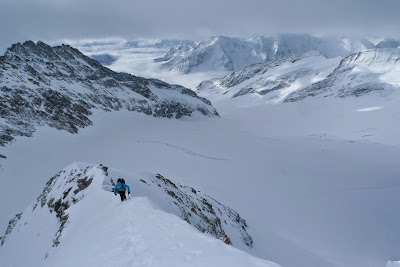 Heading up the Monch as the weather starts to close in.