In mid April I headed off on a trip to the Lygnen peninsular of Arctic Norway. At about 69°N this was the furthest North I had ever been, and my second time in the Arctic circle. This area has been growing in popularity for ski touring over the past few years, and I can understand why. Beautiful mountains, deep fjords, and good snow cover down to the beach make it a great ski touring venue.

We went as a group of five; myself, Louisa Reynolds, Martin Moran, Jonathon Preston and Robin Thomas. We hired a cabin on the peninsular, every day for a week or so did a day tour in different part of the peninsular. We did quite a lot of skinning uphill, with Martin calculating we did almost 11000 metres of ascent (and therefore descent) during the week. We experienced some quite varied conditions. Weather wise we had just about everything, sunshine, snow, wind, and rain. Equally the snow conditions were quite mixed, powder, sastrugi, windcrust, suncrust, nice spring snow and slush. Looking at the statistics for Tromso on the excellent Norwegian weather website (www.yr.no), it was unusually mild for the time of year when we were out there. Anyway, somewhere that I would like to go back to.

I won't go into the details of what we did each day, but the pictures below should give a idea of the trip (although with more emphasis on the good weather days as that is when I had the camera out). 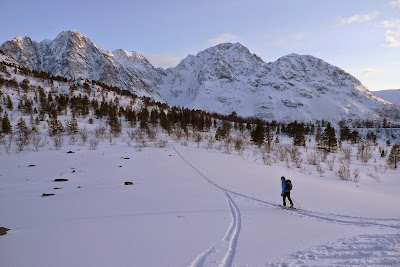 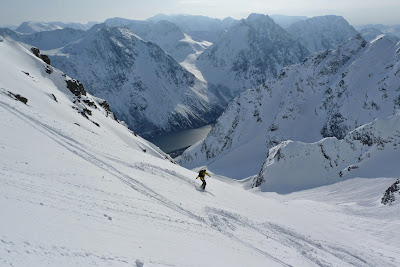 The big decent. Jonathon heading off down the big couloir from Store Kjostinden. We skied to the edge of the fjord in the background, a descent of over 1200 metres. 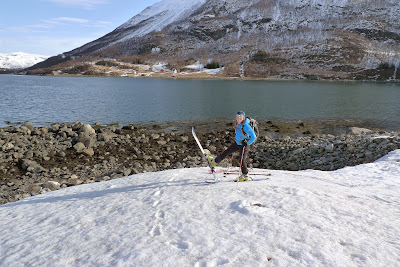 Louisa on the beach at the end of the big descent from Store Kjostinden. Nice! 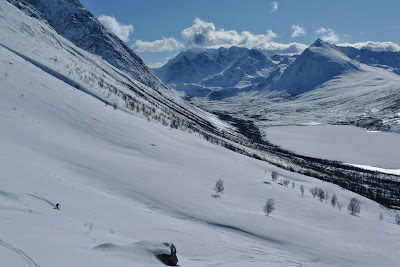 Nice snow and scenery on the descent from Storgalten. (skier in the bottom left of the picture). We did get a bit lost in the birch forest lower down, but that added to the adventure. 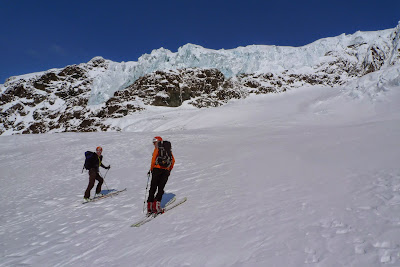 The serac band on Jiekkevarri. According to Martin (the wisened mountain guide), seracs only collapse at night. This one seemed not to know that rule, and gave us an exciting moment two shortly after this picture was taken when a large piece dropped off. 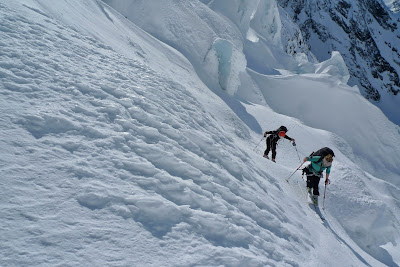 Steep and difficult skinning through the ice fall high on Jiekkevarri. Shortly after this a bit of boot packing was required. 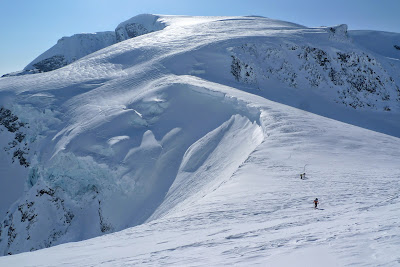 Looking back up to the summit of Jiekkevarri. We had ascended the mountain from the other side, skied down to the col, ascended another peak, and then had a long ski down back to the road. 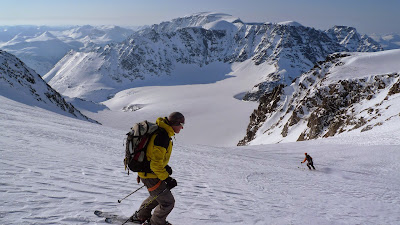 Jonathan and Martin skiing down the wide couloir on the descent from Jakavarri. 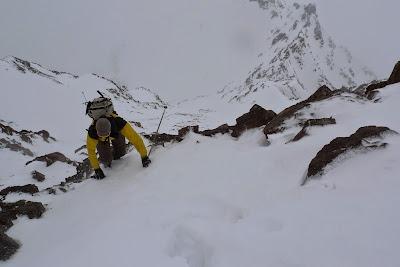 Jonathan near the top of a pointy peak (that I have forgotten the name of) on the last day. The weather was quite Scottish, and we were rained on as we approached the car on the descent.
Posted by Blair Fyffe at 20:38