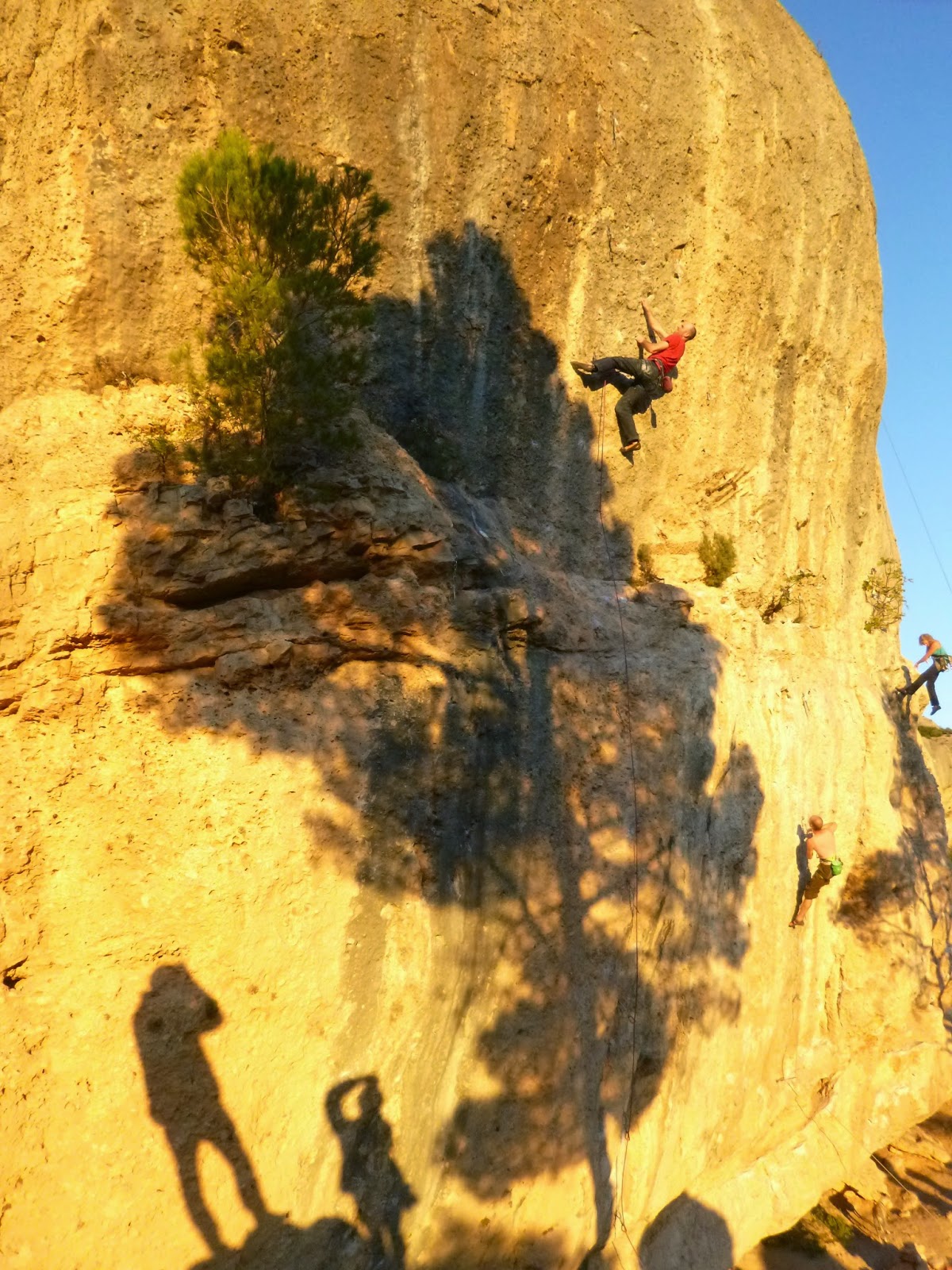 Sports climbing in Spain is quite pleasant really. Jack from London redpoints his 7c+ project at Margalef  while I enjoy the sunshine and cast (even if I do say so myself) a rather fine shadow onto the crag.

This year I visited some great crags in areas such as Rodellar, Margalef and Chulilla. I won't go into the details of exactly which routes I did where, as I think I would struggle to make it very interesting. It would turn into a bit of a list; I went to this crag, tried this route, got up it or fell off, blah, blah, blah. To me, the most memorable articles I have read about sports climbing, are not really about sports climbing, they are about personal experiences which happen to involve sports climbing. I am going to write briefly about my experiences with a certain type of sports route, one that is given grade 8a. 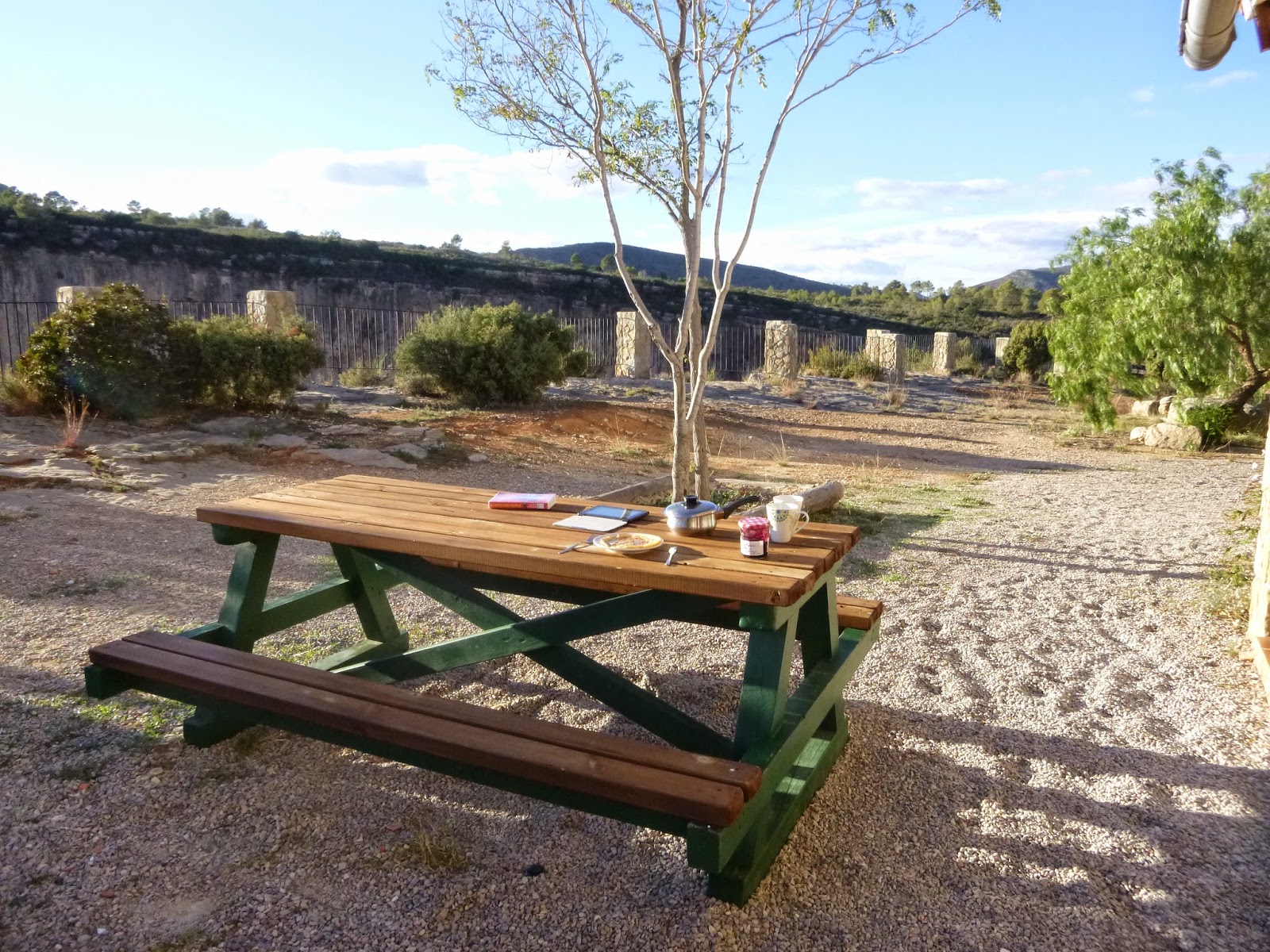 Rest days are the best days. Tea, pancakes, a good book (or four) and some sunshine made for some very pleasant rest days.

A wise friend of mine once said "Sports climbing only becomes fun when you have to try really hard". This is something I agree with. In other aspects of climbing I am often happy to do easier routes, to relax and enjoy the situation and the movement over rock. However, with sports climbing I tend to be pretty keen to chose routes that I have to try a bit harder on. Sports climbing, by it's very nature, tends to focus on technical difficulty rather than the seriousness aspect which can be a significant in other areas of climbing. In fact it is often safer to fall off hard sports routes than easier ones, as harder routes tend to be steeper and thus the fall cleaner. Due to this focus on difficulty, I find the emphasis on grades to be larger in sports climbing than in other forms of climbing.  Notice that 8a.nu, a sort of ranking system based on the grades, exists for sports climbing and bouldering, but thankfully not for traditional climbing or mountaineering. 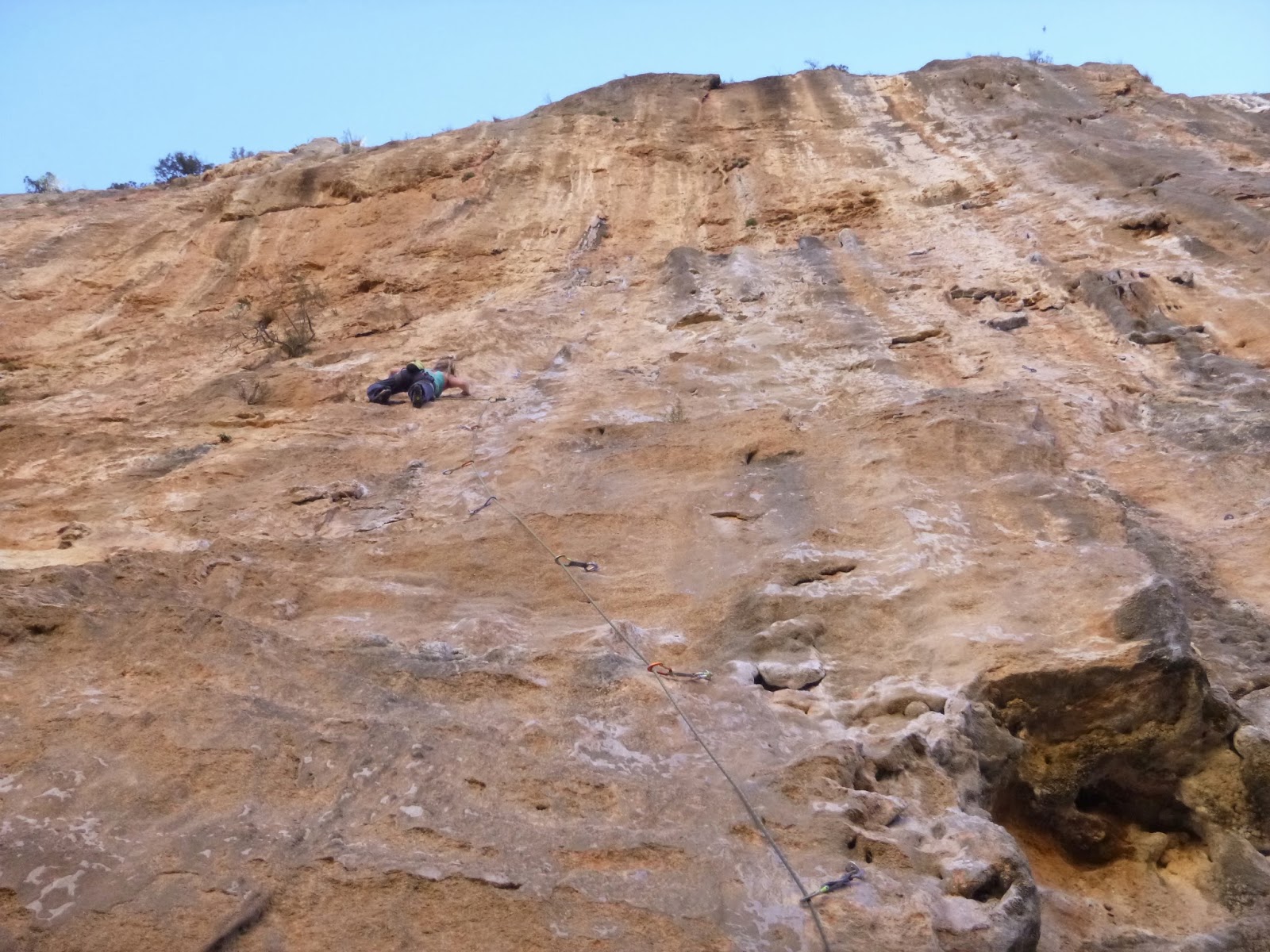 Louisa, my climbing partner in Chulilla, on-sighting Plan Z. This route definitely stretched her comfort zone, but she pushed on, clipped that chains, and was satisfied afterwards.

I remember a long time ago (about ten years ago at a guess) my friend Es asked me about my aims in sports climbing when we were walking out from the Tunnel Wall in Glen Coe. I answered that one day I would like to on-sight 8a. At the time, this seemed pretty unlikely, I think the hardest sports route I had climbed on-sighted at that time was around 7a+, 8a's felt ridiculously hard. I felt a bit nervous saying this aim out aloud, it seemed unlikely I could ever be that good. Now, I am not naturally strong or technically gifted, but I can work hard, be tenacious and stick with things. For the past ten years I have worked hard on my climbing, pushed through various plateaus, and slowly but steady got better.

Finally, a couple of weeks ago, I decided to try to on-sight my first 8a. I tied in and nervously pulled on to a route called La Boca de la Voz, in Chulilla, Spain. Through the easier bottom section I got in the flow, climbing almost without conscience thought, a good place to be for a hard route. The first crux involved some large moves between okay holds, but with very poor foot holds. It felt like my feet should have popped off, but they didn't, so I kept on slapping. I sort of surprised myself by reaching some good hold above and an okay rest above. The second crux section was above, although not as powerful, it was much longer and very sustained and tenuous. Every move was a battle to stay on, but somehow I did, inching my way higher. Eventually I got a good pocket, and the chain was there within reach. Reaching up to clip the chain felt like quite a profound moment in my climbing career. 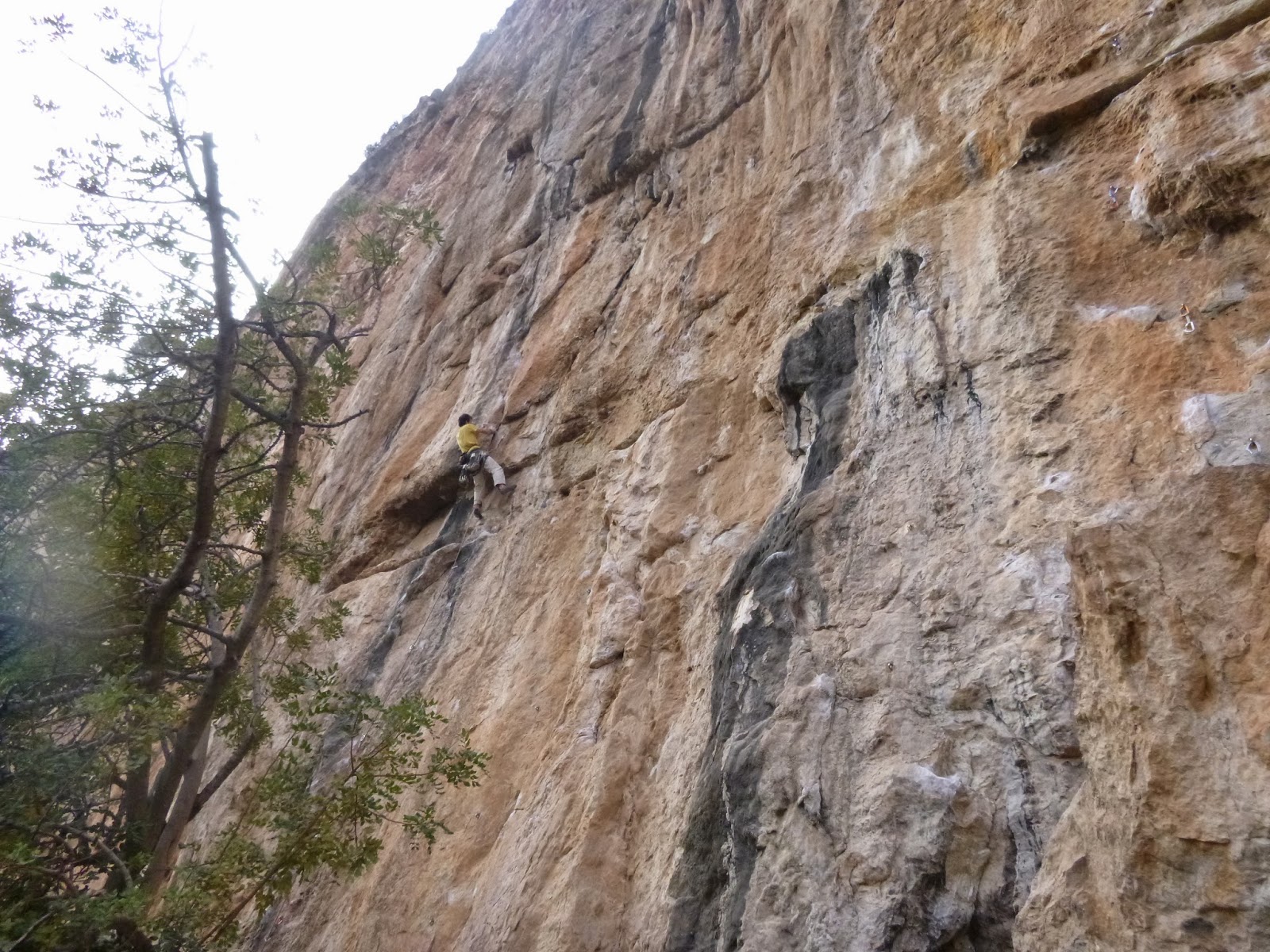 A Spaniard on the lower section of  La Boca de la Voz.

Whether or not La Boca de la Voz would get the same grade in this country I don't know. It certainly felt like it as a significant step up from all the other 7c+'s I had done in the area, so am happy to take the tick.  It certainly left me feeling pretty drained, I spent most the rest of the day starring blankly into the middle distance.

Now am I trying to imply I am particularly good at sports climbing. In Spain there are thousands of men, women and children on-sighting 8a and harder all the time. In fact Dmitry, a Russian who was staying in the same refugio as us, climbed this route (probably on-sight) in the dark with his head torch to get the clips backs. Nor I am not trying to say anything deep or profound. I went to Spain, tried hard, climbed well (for me), did some great routes and by on-sighting this particular route achieved a long held goal of mine.  I found this very satisfying, and something that everybody whose has climbed any route that has every really stretched them can relate to.