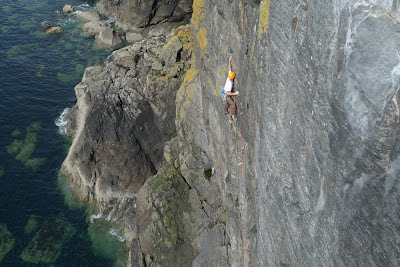 Ian Talyor at about half height on the first ascent of The Ambassadors (E6 6B).

I think it is fair to say there is a lot of unclimbed rock in the North West of Scotland. Over the past year or so Ian Taylor and Tess Fryer have been developing one such lump of rock, nick named "super crag". Having done the majority of the route there, they decided it was time to introduce some others to the wonders of super crag, and so they invited Richie Betts along on Sunday.  Luckily I had already arranged to climb with Richie on Sunday, so managed to get an invite.

The crag is made of gneiss, but it is unlike any gneiss I have seen on the mainland, very like that found out on the islands of Pabbay and Mingulay, but with some very strange blobs and pockets. The main wall, although slightly smaller, is very reminiscent of the Pink Walls on Pabbay.

Arriving at the crag, being glad of having Tess and Ian to show the way for relatively short (about 30 mins), but quite complex approach, we found the main wall in the shade. Luckily the crag has a nice single pitch, South face side wall where we did a couple of really nice E3s. 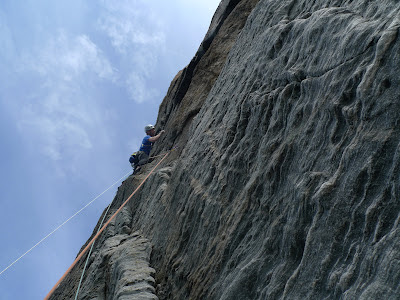 Richie on the second pitch of My own Personal Mingulay. To get an idea on the angle note the abseil rope in the background.

After that it was time to get involved in the main main. The classic of the crag (if it can be called that given that it had only had one ascent) was an E4/5 called My own Personal Mingulay. This was superb, the first pitch being really steep and burly, while the second was less steep (still overhanging though) but more technical and at times committing climbing.
Meanwhile Tess and Ian did the first ascents of variation first pitch to My own Personal Mingulay and a stunning looking 55m long single pitch E6 called The Ambassodors.
By now time was getting on so we finished of with a nice single pitch E2.
All in all a great crag, and i suspect likely to become one of the venues for trad climbing in the North west especially for routes between E3 and E6. Keep and eye out from when Tess and Ian publise it more widely. 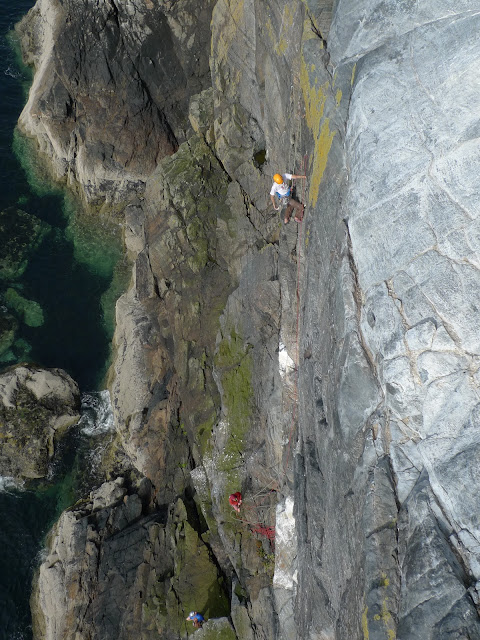 Ian Taylor, with still a lot of climbing to do, on the first ascent of the Ambassodors.
Posted by Blair Fyffe at 20:22