Steall Hut Crag in Glen Nevis is a crag with a particular season to it. It is generally wet up until about March, and being tucked up in a sheltered and boggy corner of  the glen, is often horrifically midgey over the summer months. It does however have some fantastic sport, trad and mixed routes (by mixed I mean some bolts, some wires, not as in mixed winter routes). However, with only really one route below 8a or E7, it is also quite a hard crag. 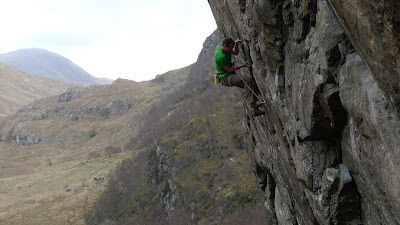 Dave working on one of his projects at Steall hut crag

Being around Fort William at the moment I was keen to take advantage of the Steall Hut Crag season to get some more routes up there ticked. Luckily some other climbers such as Dave Mac, Greg Boswell, Mike Tweedly and Alan Cassidy have also been keen to get up there and take advantage of the midge free conditions. It is good to see people coming up from the central belt driving 3 hours to work these routes. It reminds me that despite the rain and midges, Fort William can be a pretty good place to live as a climber.

Anyway a few weeks ago I started trying The Fat Groove. This 8a was bolted and first climbed by Dave MacLeod about a year ago (his post about the first ascent can be seen at http://davemacleod.blogspot.co.uk/2011/05/first-ascent-of-fat-groove-8a-steall.html  and it good to see that even he had to pull some faces on the crux). The route is very technical to begin, with the crux passing the 4th bolt. This bolt is also quite tricky to clip (cunning plan, extend the clip, and use a thin piece of strong on the 3rd bolt to pull it sideways so it can be more easily reached). After that it gradually eases but remains pumpy and with a hard move at the top where it joins Trick of the Tail. 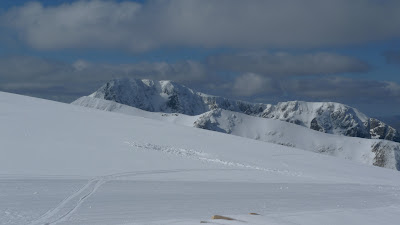 Fresh tracks on Aonach Mor in the morning, 8a in the afternoon. Good day!

However, over the last week or so, winter has made a made a bit of a reappearance, and on Saturday morning the snowy hills were looking very appealing. Therefore I had a bit of a split day. In the morning I headed up Aonach Mor on my skis, initially doing some runs on the piste (until other people started appearing) and then I had a little tour over to Aoanch Beag. Early afternoon I headed down the hill and up the Glen where I managed scrounge a belay of Alan Cassidy (cheers Alan) who was already at the crag. I shocked myself by getting through the crux first go, but then stupidly fell of some bigger holds. Perhaps due to the extra pressure I put on myself, but I then fell off the crux the next couple of goes. Finally on my 4th go I got the crux, and managed to keep on battling to the top. Cool.

Am keen for some more Steall session, wonder if I can get Leopole (another 8a) done before the midges appear.
Posted by Blair Fyffe at 21:05