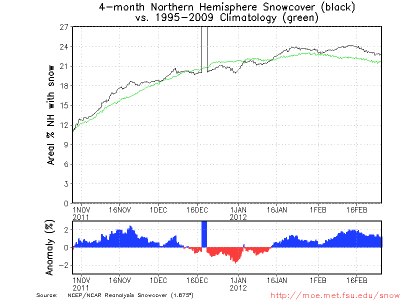 Snow and ice coverage in the Northern Hemisphere. The large spike just after mid December can be ignored as an error in the data. Coverage peaked around the 12th of February.
This value is slightly higher than 2009, and 2011, but not quite as high as 2008 and 2010. The minimum coverage occurs around late August or early September with just under 3% coverage. As ever, more information charts and graphs. can be found at the website http://moe.met.fsu.edu/snow/ 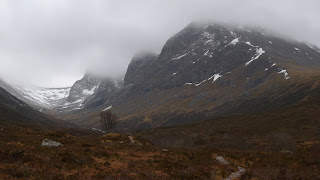 Ben Nevis not looking the most wintery last Friday. This was the one day last week when the freezing level did drop below the summits. At the time things were holding on surprisingly well higher up.  However, there has been some pretty mild weather since then.
However, Scotland certainly does not seem to be doing so well snow and ice wise.  After a good start to the season (discussed in my previous blog post) the season has gone downhill a fair bit. Little fresh snow fell through the rest of January of February, and then 10 days of thaw struck Temperature reached over 8°C on the summit of Aonach Mor on Monday (27th).  Particularly unfortunately for me the thaw coincided with a block of 6 days off I had, where I had been keen to winter climb. Never mind, got lots of jobs done and managed a days bouldering out at the Arisaig cave. Looking colder next week. 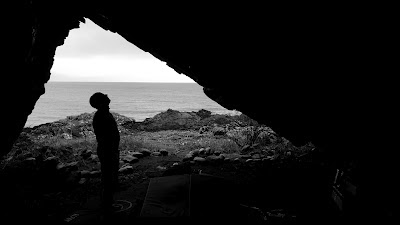 Bouldering at the Arisaig cave. Managed a new link on one of the problems I have been trying, good to see all the time in the Kimber wall is paying off.
Posted by Blair Fyffe at 21:34