I will admit that I have not updated my blog for a little while. However, it does not feel like very much has been happening climbing wise. This summer I have been working three days a week as the Nevis Conservation Ranger for the John Muir Trust. This has been interesting and varied. Through May and June this involved a lot of environmental monitoring, which is a fancy phrase for wandering about the hills counting and measuring things. However, as I enjoy wander hills, as well as counting and measuring things, this has been very enjoyable. 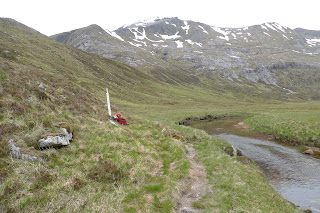 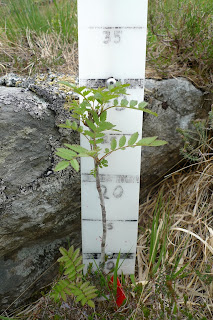 I had thought by only working 3 days a week I would get loads of climbing around Scotland. However, the weather has been terrible, and it has not really worked out like that.


Back in May, after a warm up day in Glen Nevis I headed out with Iain Small to a crag he was developing inGlen Coe. This was definitely not a warm up crag. The weather conditions were not great, but Iain was keen a very bold E7/8 wall before all the avalanche debris at the bottom of the route melted, making the prospect of falling off even more terrible. I came along as belayer and chief snow shoveller. We spent about 20 minutes flattening the avalanche debris at the bottom. The prospect of falling off the crux unprotected crux at about 30ft was still terrify, but Iain seemed to ramble up it with out too much difficulty. I fell off seconding (cold hands, or that was my excuse at least) and was only just able to swing to the rock in given the overhanging nature of the route. We also did a good E4/5 that day as well. I think Iain went back to add another E5 and E6 onto the crag with Niall MacNair.

The next trip was down to the Lakes with Murdoch. Murdoch wrote extensively about this on his blog, but I can summarise it here; the grades in the Lakes tend to be a bit stiffer than those in the North West or Wales, and some of the hard routes weren't super clean, but it was fun.

A few weeks after than I had saved up enough holiday, and headed down to Wales. The weather forecast was very good, but unfortunately, it did not work out like that (it rained quite a lot). There was a fair bit of standing around the bottom of some very good routes in the Llanberis pass watching it rain, wondering if it was going to clear up. However, we did some good routes done in the pass such as The Edge of Time, Rimsky Korsakov and Surgical Lust. There was one good dry day, and so we headed up to Cloggy where we did A Midsummer Nights Dream, Curving Arete and Great Wall done.

That has been about the total of my climbing this year, but I am heading to the Alps for some hopefully sunny rock soon.
Posted by Blair Fyffe at 10:57