Scores on the Doors

Last week I had six days off in a row. Due to the changing rota that we use at work I did not actually know that I would have six consecutive days at the start of that period, but that was the way it turned out. Here is a wee summary of what I got up to, or tried to get up to, and how it turned out.

Day 1. Bouldering. Feeling pretty tired from a long stint at work, so rather than have a hill day, do some jobs and then head up the Glen Nevis for a boulder with Dan. We start by going up to Sky Pilot. It was windy and cold here, but I did manage the slightly more sheltered problem of Tinderbox again. I first did this problem in about 4 years ago after a couple of months of intensive work on it (I was unemployed at the time). Since then I have tried it on and off when I have been up that way, but up until this point never again managed it  After that we headed down and spend a few hours trying various links and combinations the much warmer at Heather Hat boulder. Success score 8/10. Loses a couple of points for being so cold and windy at Sky Pilot where I had hoped to make a bit of progress on Beetle back.

Day 2. Four tops on Skis. Got up early and headed over the Cairngorms where I got the first lift up to the top of the ski area. Met and blethered to school friend who works of the ski patrol over there. Then skinned to top of Cairngorm, over the Ben Macdui, skied down into the Lairig Ghru, up the other side to Braeriach, over to Cairn Toul, back over Braeriach, down Coire Gorm, back across the Lairig Ghru, and past Chalamain gap to Cairngorm car park. The weather was lovely, and I had wanted to do the four tops on skis for a while.  However, the loses half a point as I kept my ski boots too tight on some of the walking sections, and wore a hole in my shin. No more ski touring for me for a couple of weeks. Success score 9.5/10. 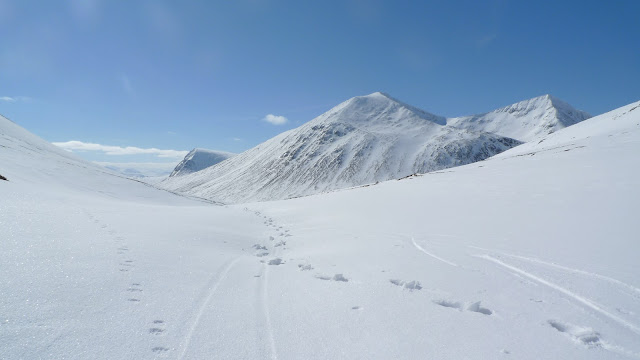 Looking south from the Lairig Ghru to Cairn Toul.

Day 3. Job hunting. Had planned to go climbing on the Ben, but my mates car is broken and he has to bail. Instead I spend the day looking for a job of the summer. Fail to find one. At least I have a rest. Success score 1/10.

Day 4. Trad climbing. Head up the North West with Nona. Again the weather is lovely. We go to Ardmair, where I do three routes between E2 and E4. Nona leads her first E1 of the season. However climbing is cut short by approaching darkness. Our plan to stay in the Elphin hut falls through when we discover it is full. Have no bivi or camping kit, but find a bunkhouse near Ullapool to stay in. Success score 8/10. Loses two points due to he dark/cold stopping climbing at the crag, and the accommodation situation.

Day 5. Sports Climbing The weather is a a bit cold and drizzley so we head down to the sheltered venue of Am Fasgadh. Try a few routes there, the grades feel desperate, but we have fun trying. Success up to this point 7/10.
Drive South, towards the Ling hut. I had meant to fill up with fuel in Ullapool, but due to the faff with accommodation I had forgotten. The petrol station at Dundonnell is closed, as is the one at Laid. Breath a sigh of relief when we see a sign for 24 fuel in Gairloch. Pull into the petrol station, and discover the 24 hours fuel is a slight misnomer. It is now 6.30pm and the garaged closed at 5.30pm. Drive on to Kinlochewe, stop and try and decide what to do. Get a text, Iain and Murdoch have just done a new route on the Ben. I live beside Ben Nevis and yet am sitting in Kinlochewe in the rain with almost no petrol while they have done a new route.. Success for the evening so 0/10. Head to Ling hut.

Day 6 Go Home. Get up early, the plan was for a winter route on Ben Bhan. However, it is snowing and windy, and the psyche is low. Drive to the car park for Ben Bhan, and fall asleep for an hour. Give up on winter climbing and make it to Loch Carron on vapours where we find a open petrol pump. Fill up the car and then head home. After a wee snooze have a good bouldering session down the wall. Success 5/10. 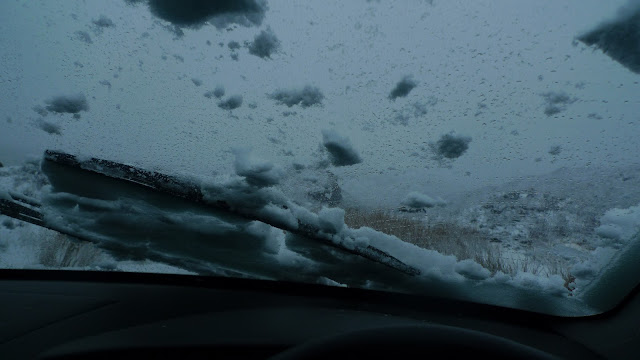 The view from my car (the one with very little fuel) on the morning of day 6. It is not inspiring me to go winter climbing.