Blessed are the weak

I have been down in Wales for almost 3 months now, and have been pretty busy during that time. Between work, climbing and another wee project which I will discuss more in the autumn, I have been pretty busy, hence the lack of blog posts.
Generally climbing has been going well. I have been mixing it up between trad, sport and bouldering, with some good routes (for me) in all those areas. One of the great things about North Wales is the number of keen climber and good climbing venues close by. 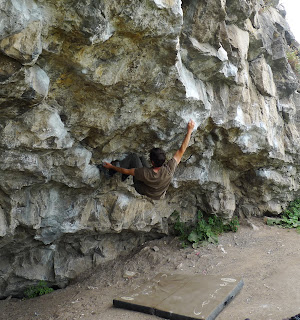 Myself of some steep and powerful terrain in the cave, this is the sort of ground I struggle on.
Getting out in the evening and on my days of I have started to notice something; compared to other people who climb about the same level as me, I am weak, well weak. This is most obvious on really steep terrain there are some moves that others do with ease, and I just can’t do. For example I have been trying Jerry’s roof  (a classic V9 boulder problem in the Llanberis pass) for a while, and just can’t do one particular move on it. Usually what happens is that I turn up, and fail repeatedly while my friends lap it with ease. I feel sort of like King Sisyphus from Greek mythology who was made to roll a huge boulder up a steep hill, but before he could reach the top of the hill, the rock would always roll back down, forcing him to begin again and thus condemning him to an eternity of frustration.
However, get them on the 8a’s at lpt, trad routes or on a long sustained but not super steep boulder problem, and then suddenly I can keep up with them. For example of Over the Moon direct (a classic 8a) others seem to cruise through the lower hard moves, but then fall off higher up where as I am struggling right from the start but seem to be able to somehow keep on slapping and struggling to the top. 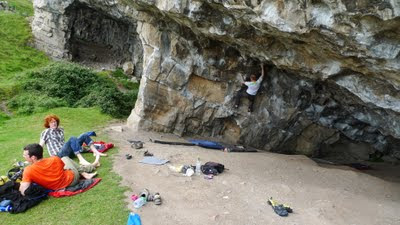 Dave Evans working on Left Wall High (V9) while Guy and Steve show very little interest.  Starting at the very back of the cave this gently overhanging, long sustained and technical traverse was my first (and so far only) boulder problem of this grade.
Long sustained endurance routes have always suited me more than short hard powerful ones. I think I have reasonable technique and am good at being tenacious. Anyway will keep throwing myself at Jerry’s, and who knows maybe one day I might get it and unlike Sisyphus free myself for an eternity of failure. Even if not I am not too bothered as I am enjoying trying it,  am getting up plenty of other good things, and if it gets really bad I can always tell myself it is a rubbish boulder problem anyway.
Posted by Blair Fyffe at 13:17